A victory celebration may have been just a little bit too much for one area mayoral candidate.

Officials in Nash County said Robert Williams, Jr. was arrested for a DUI hours after being elected the mayor of Sharpsburg.

He was booked into the Nash County Jail after 11:30 Tuesday night and bonded out early the next morning.

Williams, who was the tri-county town’s appointed mayor from 2011-2013, defeated incumbent Randy Weaver in a do-over election.

Tuesday’s special election was called in response to irregularities found in a Wilson County precinct November 7.

Williams’ complaint was found to have merit and a Wake County Superior Court judge ordered a special election to determine the winner of the mayoral race.

Sharpsburg is divided between Nash, Edgecombe, and Wilson counties.

OS/2 Chicken : It crossed the road in style years ago, but it was so quiet that nobody noticed. 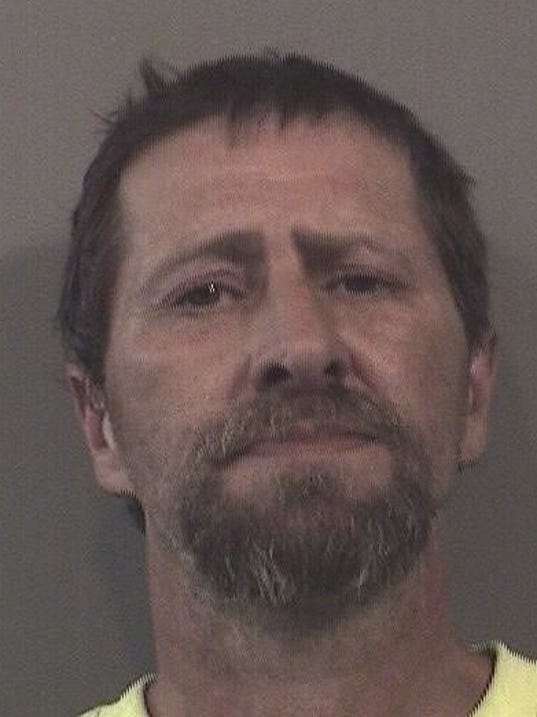 INDIANAPOLIS — An Indiana man was arrested and charged with driving a lawn mower while intoxicated, police said.

On Saturday, officers pulled over Barry Ridge, 46, of Franklin, Ind., while he was driving down County Road 100 North on a red lawn mower, according to the Johnson County (Ind.) Sheriff’s department.

The Franklin Police Department received a complaint early Saturday evening from someone upset that Ridge drove onto their yard and started mowing the grass. Ridge then headed down the road.

Officers said Ridge’s eyes appeared “glassy.” He failed a breathalyzer test, which found his blood-alcohol level to be 0.189%. In Indiana, the legal limit for intoxication is 0.08%.

This isn’t the first time Ridge was arrested for driving his lawn mower while drunk, according to police records. He was arrested in a Kroger parking lot for operating the mower while intoxicated and “causing a disturbance” on April 8. His Huskee lawn tractor was impounded.

Ridge is still awaiting trial for the first arrest. He was taken to the Johnson County Jail on Saturday.

“Tails it is. We find the defendant guilty.”

Two to three calls were made to State Police reporting a white SUV driving erratically on Routes 28 and 95.

Troopers from the State Police barracks in Danvers arrested Alfred G. Burgos, 35, after stopping him in the Goodwin Circle Rotary in Lynnfield at around 11:40 p.m. on Saturday.

The officer had been honored at the 19th annual awards dinner in Malden for the Irish American Police Officers Association.

Sources tell Boston 25 News that Burgos received the Medal of Valor for being on the front lines during the gun battle with armed suspects in Roslindale in October of 2016.

He was then charged for operating under the influence of liquor, negligent operation of a motor vehicle, and committing a marked lanes violation.

The officer was bailed from the barracks and will be arraigned some time this week. He has been relieved of duty pending a departmental duty status hearing.

Burgos is assigned to the State Police Division of Investigative Services, and is expected to appear in front of a judge on Thursday.

State Police have not released any further information.

NT Chicken : Will cross the road in June. No, August. September for sure.

Thomas Wangler, 54, of Algonquin, was acquitted of aggravated DUI but convicted of driving with a suspended license.

A man who authorities say has five DUI convictions has been found not guilty of another drunken-driving charge after refusing to take roadside sobriety tests.

According to the McHenry County sheriff’s deputy who pulled him over for speeding, Thomas Wangler smelled of alcohol, had glassy eyes, was slurring his words and had an open can of beer in his car during the 2016 stop.

But lacking evidence of his blood-alcohol content, Wangler was found not guilty Tuesday of aggravated driving under the influence, a felony. Prosecutors said the 54-year-old Algonquin man has at least five prior DUI convictions, with his indictment citing three in Cook County, all in 1990, and two in McHenry County, in 1993 and 2001.

Police in several McHenry County communities pointed to these kinds of cases when they announced last month that they would move to a no-refusal policy. That means that if a driver who is suspected of DUI refuses a breath test, police will automatically seek a warrant for a blood test.

Authorities said they made the move mainly to target repeat offenders who they say know how to game the system by refusing roadside testing, despite the other penalties that can come with that, including a driver’s license suspension.

The officer who arrested Wangler in 2016, Sheriff’s Deputy Jeremy Bruketta, testified this week that he pulled Wangler over along Route 31 near Crystal Lake because his Cadillac was going 11 mph over the speed limit.

Bruketta testified that Wangler refused to take a roadside sobriety test or submit to a Breathalyzer. He admitted to not having a driver’s license and repeatedly asked the officer to just let him go because he was blocks from his home, Bruketta said.

He said Wangler smelled of alcohol and had “mush mouth” and red and glassy eyes. Wangler told Bruketta that he’d had three drinks that day and became “childish” and “belligerent” as he was driven to the police station, the officer testified.

He said Wangler yelled at him to “get a real job” and to “go get real criminals.” Wangler also accused the deputy of drinking and driving and said that he gets away with it because he “has a badge,” the deputy testified.

He noted that Wangler slowed down after seeing the officer and didn’t weave or show impairment in operating the car before stopping.

“Seeing a cop and slowing down is not the action of an impaired driver … it is the action of every driver,” Walsh said. “ … The cop jumped to a conclusion.”

Walsh also said Wangler pulled over in a safe spot and showed no indication he would flee. With the deputy on the stand, Walsh argued that smelling the odor of alcohol only indicates it was consumed and does not prove impairment.

‘Your Honour, if it pleases the court, I’d like to take everyone to the park and buy them an ice cream.’ 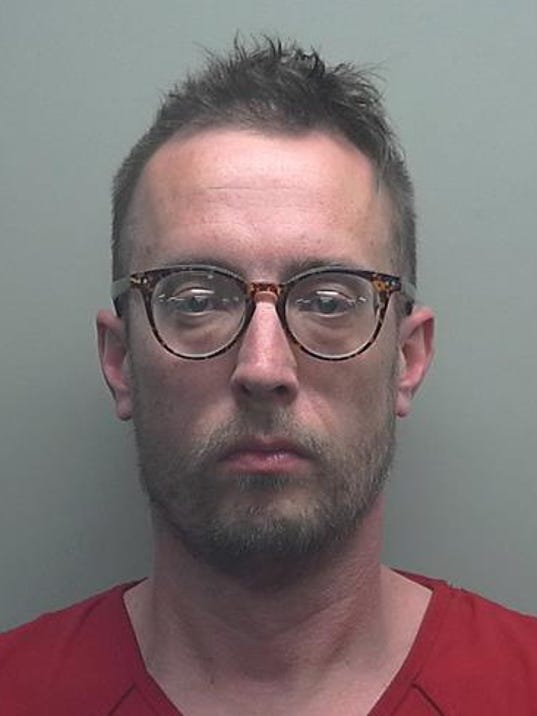 SHEBOYGAN – The father of two young children who fell out of a van in Sheboygan this week showed no signs of alcohol intoxication when police interviewed him about the incident, according to a criminal complaint.

Police earlier this week said they had arrested Robert W. Horsch for operating while intoxicated, but prosecutors on Thursday instead charged the 40-year-old Sheboygan man with two counts of felony child neglect, along with a third felony for knowingly operating a vehicle with a revoked license—all three counts involving bodily harm.

In a statement earlier this week about the incident, Sheboygan police said officers had arrested Horsch for OWI and child neglect. Prosecutors’ criminal complaint, though, notes there “were no signs that (Horsch) was intoxicated by alcohol,” though he had told police he was taking medications for depression and anxiety.

An officer had also reported noting Horsch’s eyes were red and that he was showing signs of “cotton mouth” during an interview. The complaint notes police obtained a search warrant to test a sample of Horsch’s blood; test results were still pending by the time prosecutors filed charges.

Witnesses reported on Tuesday seeing two children — one was 22 months and the other 3 years old — fall from the back of a van as it turned through a roundabout near the corner of South Eighth Street and Indiana Avenue in Sheboygan. One witness told police the vehicle kept going without stopping or braking after the children had fallen out. 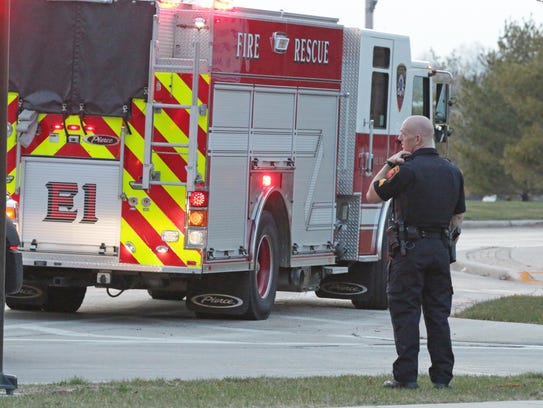 A Sheboygan police officer radios back to dispatch at the scene where two toddlers fell out of vehicles near the 8th Street Rotary near Indiana Avenue, Tuesday, May 1, 2018, in Sheboygan, Wis.  (Photo: Gary C. Klein/USA TODAY NETWORK-)

The 22-month-old child reportedly had a broken bone in his skull and road rash on his shoulder and back, while the other child also had road rash on his back, abrasions on his chin and a chipped front tooth. Both were taken to a local hospital, and officials later decided to transport the younger child to Children’s Hospital of Milwaukee for treatment of the skull fracture, according to a criminal complaint filed with charges in Sheboygan County Court.

After identifying the children, police traveled to their home in Sheboygan, where officers found a 10-seater “work-type” van parked in front of the house. When another vehicle later dropped off Horsch at the home, he told officers that his two children — the same ones police had identified as falling out of the van — were missing.

Horsch “expressed disbelief” at officers’ report about his children falling out of the vehicle, according to a criminal complaint.

He told officers he’d arrived at home with what he thought were three of his children after dropping off two of his other children at a nearby Christian family center.

He said he only noticed his two other children were missing after taking a third child into the house and getting her ready for bed.

Police often need the public’s assistance to solve crimes. If you can help, please contact the appropriate agency. Wochit

He told police that he’d noticed the two young children had gotten out of their car seats and were playing as he drove back home from the family center. He said he’d taken no further action beyond telling the children to settle down. He said he had assumed the children fell asleep after they became quiet near the back of the van.

Horsch also said he wasn’t aware the van’s back door could open from the inside, and that he hadn’t seen any interior lights come on or heard warning bells indicating the door had opened.

A complaint also notes he told police that he knew his driver’s license had been revoked as he drove that evening.