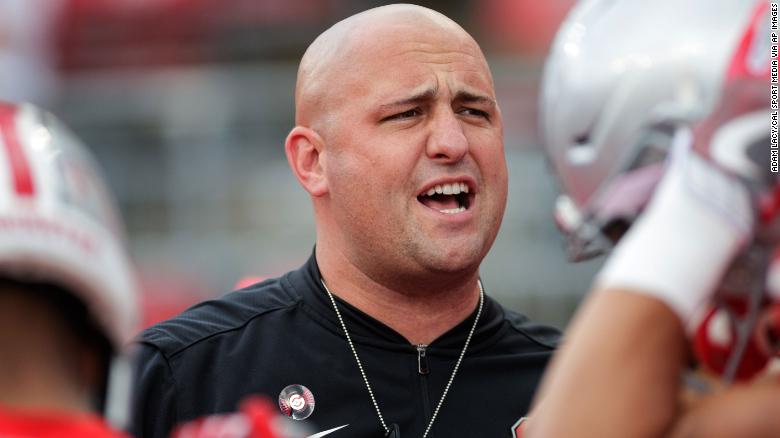 Zach Smith was fired by OSU in July.

Smith was arrested for operating a vehicle while intoxicated in 2013 in Dublin, Ohio, according to police records first obtained by the Toledo Blade. The arrest previously had not been reported until Monday.
According to the police report, which CNN has since obtained, Smith was pulled over by a police officer and was later arrested. Smith was given a field sobriety test and refused a breathalyzer test, the report said. The charge was later reduced to physical control, a first-degree misdemeanor. 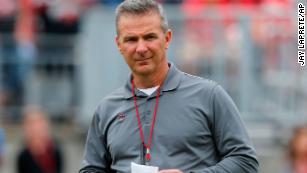 Urban Meyer: ‘I am confident that I took appropriate action’
Smith was fired by Ohio State on July 23 after he was served with a civil protection order on behalf of his ex-wife Courtney Smith. The order, signed July 20, is effective until 2023 and prohibits him from going within 500 feet of her.
Regarding the 2013 arrest, “Zach’s case was quickly reduced based upon the lack of evidence that he was noticeably impaired,” attorney Brad Koffel told CNN via email Tuesday. “He attended a 72-hour alcohol intervention program and no follow-up counseling was recommended.
“Zach never told Coach Meyer. Much like his 2018 criminal trespass case filed against him by his ex-wife, Zach chose to deal with it on his own and not involve the university or athletic department.”
ESPN reported on Monday that Smith did not tell Meyer about his 2013 arrest.
In a July 23 Facebook post, college football reporter Brett McMurphy detailed a series of domestic violence allegations against Smith dating back to 2009 and 2015.
Courtney Smith spoke to Stadium, a sports network, outlining accusations that Zach Smith on various occasions threw her against a wall, picked her up by her neck, took a golf club to her car and broke her windshield after a recruiting dinner.
In an interview earlier this month with Sports Radio 105.7 FM The Zone, in Columbus, Ohio, Zach Smith said he and Courtney Smith had a volatile relationship, but he denied allegations of physical abuse.
“I never hit her. …I never got charged,” he said. “I got investigated twice, and no charges ever came about it because I didn’t do anything physically to harm her.” 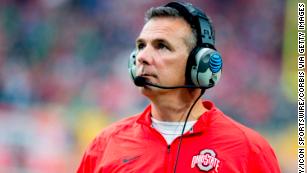 Did Urban Meyer know of alleged abuse? Assistant’s ex-wife calls out coach in latest Ohio State scandal
Meyer, who has won three national championships (two at Florida and one at Ohio State), is on paid leave as the school investigates exactly what he knew about the spousal abuse allegations leveled against his longtime assistant. Meyer said at Big Ten media days on July 24 that the protection order had “a little bit” to do with Smith’s firing, but that the decision to ax him was a “group effort.” 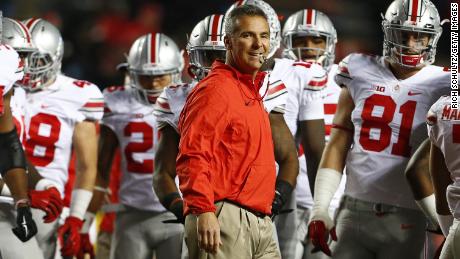 OSU head coach Urban Meyer placed on leave 00:44
Meyer initially denied knowing about the 2015 allegation against Smith when asked about it at Big Ten media days. He later said in a statement that he had been inadequately prepared to discuss the issue and that he looked forward to answering questions for the independent investigators.
“While at the University of Florida, and now at The Ohio State University, I have always followed proper reporting protocols and procedures when I have learned of an incident involving a student-athlete, coach or member of our staff by elevating the issues to the proper channels,” Meyer said in the statement. “And, I did so regarding the Zach Smith incident in 2015.”
Ohio State said on August 5 that the investigation is expected to be completed within 14 days.
The Buckeyes’ football season opener is September 1 against Oregon State.
https://www.cnn.com/2018/08/14/sport/ohio-state-zach-smith-2013-arrest/index.html?utm_source=feedburner&utm_medium=feed&utm_campaign=Feed%3A+rss%2Fcnn_latest+%28RSS%3A+CNN+-+Most+Recent%29&utm_content=Yahoo+Search+Results
(Visited 36 times, 1 visits today)