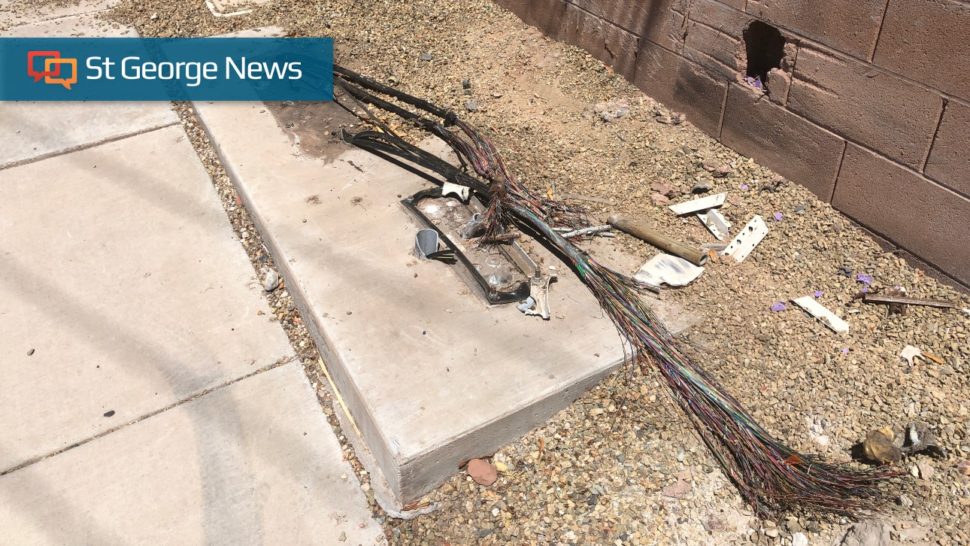 Exposed wires were all that was left of a CenturyLink pedestal box at the corner of Valley View and Shadow Point drives after a suspected drunk driver hit it in St. George, Utah, on July 9, 2020. | Photo by Chris Reed, St. George News

ST. GEORGE — A man who police say was intoxicated behind the wheel slammed and took out a CenturyLink relay box in St. George, potentially knocking out internet and landline phone service for customers in the area.

The crash took place around 2:10 p.m. at the corner of Valley View Drive and Shadow Point Drive in the northern portion of the city.

Police said the man was driving a Honda Pilot south on Valley View when he swerved across three lanes into the northbound side of traffic. The SUV didn’t hit any other vehicle but ended up on the sidewalk, crashing into the CenturyLink pedestal box and then a cinder-block wall before ending up back in the northbound lanes, blocking the corner and oncoming traffic.

St. George Police were on scene to direct traffic around the crash. What was left of the CenturyLink box was shattered all over the sidewalk and into the street. All that was left where the box had stood was a string of exposed wires and cables.

A representative for CenturyLink was not able to indicate the number of customers affected or how long the outage would continue, though they said a technician would be out around 5 p.m. A city of St. George maintenance vehicle arrived on scene to ensure there would be no potential hazards from the exposed wires.

Police took time to inspect the SUV, which was full of painting equipment and other materials that filled the passenger space of the vehicle.

St. George Police Sgt. Tyrell Bangerter said the driver, the sole occupant of the vehicle, was arrested on suspicion of drunk driving. The man, in his 20s to 30s, was not injured. The driver-side airbag was deployed in his vehicle.

Each crash has a lesson to tell, and Bangerter said the lesson of this incident was simple.