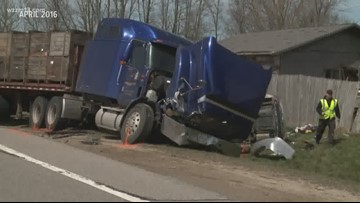 MUSKEGON COUNTY, Mich. – The man charged with driving under the influence of marijuana in a crash that killed his older brother appeared in court Monday, April 9.

The fatal crash happened on April 11, 2016 in Muskegon County near Casnovia. Michael O’Berry, 25, hit a semi-truck on Apple Avenue while driving on Trent Road. His older brother Nathan O’Berry died in the accident.

A urine sample confirmed a presence of active THC in Michael O’Berry’s system, said Muskegon County Prosecutor Chief Trial Attorney Matt Roberts Monday. The felony charge for driving under the influence of a Schedule I controlled substance carries a maximum penalty of 15 years in prison.

Drunk driving accidents took the lives of more than 10,000 people in 2016, a report by National Highway Traffic Safety Administration said. But “drugged driving” accidents are an increasing problem. And the National Institute of Drug Abuse said marijuana is the drug most-linked to impaired driving after alcohol.

In fact, driving on drugs was linked to more deaths in 2015 than driving drunk, according to a report by the Governors Highway Safety Association and Foundation for Advancing Alcohol Responsibility.

In Michigan, an at-fault driver with any amount of a Schedule I drug, including marijuana, can be criminally charged like O’Berry. However, state courts have said if the driver is a medical marijuana cardholder, the prosecutors have to prove the driver was “impaired by the presence of marijuana in his [or her] body.”

“If somebody doesn’t feel the effects of THC…they pass the roadside sobriety tests, only to—later on—have blood results come back saying they had a de minimis amount…they will be prosecuted,” Rodenhouse said.