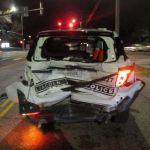 A Lincoln Police cruiser is out of commission after it was rear-ended by a 2001 Mitsubishi Montero SUV on November 28th just before midnight.  The officer was heading south on S 4th Street between South and Normal Blvd.  The officer slowed for a red light when the vehicle was hit from behind.  The officer was able to get out of the cruiser and assist the 21 year old SUV driver.

Medical units were called along with other responding officers.  They noticed the female smelled of alcohol and showed symptoms of being under the influence of alcohol.  Her blood alcohol level tested at 1.49 and she was cited and released for DUI and negligent driving.

The officer was taken to an area hospital and was treated and released for non-life threatening injuries. https://www.klin.com/2020/11/30/lpd-cruiser-rear-ended-saturday-driver-cited-for-dui/