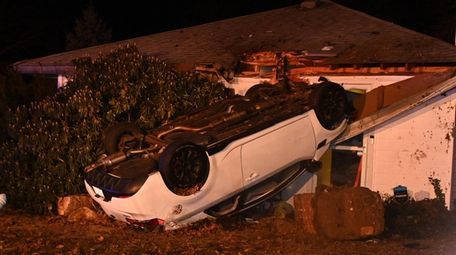 The scene of the crash in Shirley early Monday.

A Shirley teen was arrested and charged with driving while intoxicated after Suffolk County police said he hit a brick stanchion and continued into a home on nearby Floyd Road South early Monday.

The sole occupant home at the time was not injured in the incident, which occurred at about 12:25 a.m., police said.

The driver, identified as Jefersson Soysos, 19, was transported to Long Island Community Hospital in East Patchogue for treatment of what police described only as “non-life-treatening injuries.”

He was charged with driving while intoxicated and is scheduled for arraignment at a later date, police said.

Police said Soysos struck the brick stanchion outside the home, which is located at a T-intersection with Chanel Drive East, about a block from his own listed address, only to have the 2011 Kia Forte he was driving overturn and careen through the front wall of the home. https://www.newsday.com/long-island/crime/shirley-teen-crash-dwi-home-1.50115708