NOVEMBER 15–A Florida Woman who was pulled over early yesterday claimed that her erratic driving was “due to her eating an eggroll” while behind the wheel, according to police 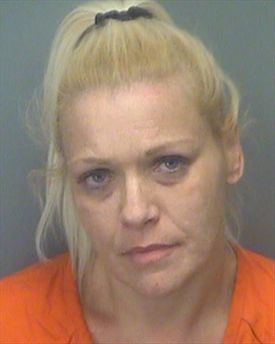 who arrested the motorist on DUI and narcotics possession charges.

Upon spotting a vehicle drifting between lanes on a St. Petersburg roadway around 2 AM Sunday, police conducted a traffic stop to “check the well being of the driver for sick, injured or impaired,” according to court filings.

When a sheriff’s deputy approached driver Maria Jurgilewicz, 45, “the defendant had a distinct odor of an alcoholic beverage coming from her breath.” Jurgilewicz, the cop added, had “difficulty following simple instructions” and “her speech appeared to be slurred and mumbled.”

Asked about her erratic “driving pattern” Jurgilewicz “claimed it was due to her eating an eggroll while driving.”

While arrest affidavits make no mention of an egg roll (or egg roll fragments) being found in Jurgilewicz’s auto, cops did seize “several different types of pills,” including the opioid Tramadol, from the car. A straw with “white powdered residue on the inside was found near the pills,” an investigator noted.

Pictured above, Jurgilewicz was arrested for possession of a controlled substance, a felony, as well as driving under the influence and possession of drugs without a prescription, both misdemeanors.

The St. Petersburg resident was released yesterday from the county jail on her own recognizance. Jurgilewicz’s rap sheet includes convictions for disorderly conduct and violating probation. (2 pages) https://www.thesmokinggun.com/documents/drunk/eggroll-defense-falls-flat-018476