Machiavelli : So that its subjects will view it with admiration, as a chicken which has the daring and courage to boldly cross the road, but also with fear, for whom among them has the strength to contend with such a paragon of avian virtue? In such a manner is the princely chicken’s dominion maintained.

A Long Island woman’s quest for breakfast ended in a jail cell after police say she drove up to a jail security booth and mistook it for a fast food drive-thru window.

Lizabeth Ildefonso, of Jamesport, N.Y., was arrested on March 16 after she drove up to the Suffolk County jail and tried to order a “bacon, egg, and cheese.” According to the Riverhead News-Review, the 44-year-old was told by Suffolk County deputies that she was really at a jail but kept demanding breakfast. Ildefonso “insisted that she really wanted a sandwich,” the Suffolk County Sheriff’s office said in a statement.

Officers at the jail noticed that Ildefonso’s eyes were glassy and she had a white powder in her left nose before performing a sobriety check. After “performing poorly” in a field sobriety test, the woman was arrested for driving while impaired by drugs. Police also noted that the 44-year-old was driving without a valid license.

“It apparently was put to good use today although the surrounding circumstances were a little unexpected,” the Sheriff’s office added. 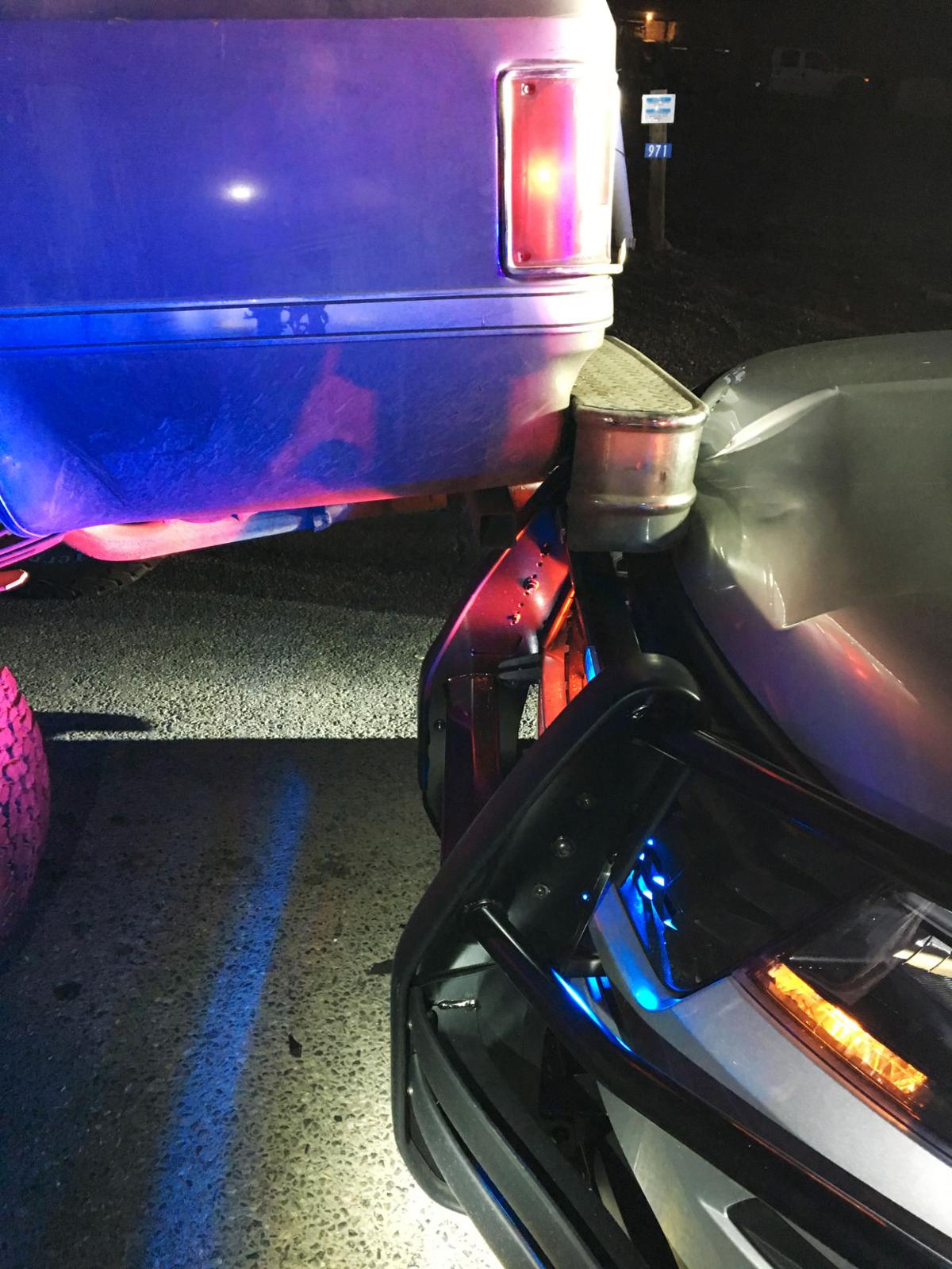 Bail was set Tuesday at $100,000 in Yakima County Superior Court for the suspect. At the time of his arrest, he had been released from jail as part of the court’s pretrial release program, which required him to check in regularly with court staff.

In the latest incident, a deputy had stopped a Chevrolet pickup for a minor traffic violation near Branch and South Wapato roads about 12:10 a.m., according to court documents. When the deputy learned the truck had been reported stolen in Yakima, he tried to get the driver to step out of the vehicle, but the suspect instead drove off, a probable-cause affidavit said.

Deputies and Washington State Patrol, Wapato and Yakama Nation Tribal police officers joined the pursuit, the affidavit said, with speeds reaching 70 mph. The truck stopped on Progressive Road, and the driver then rammed the back of the truck into a deputy’s vehicle, court records said.

The truck became high-centered on the deputy’s hood, as the suspect continued to gun the engine, the affidavit said.

Authorities said the suspect tried to bite deputies as they took him into custody. One of the deputies used a Taser stun gun twice to subdue the suspect, the affidavit said.

The deputy’s vehicle was rendered inoperable, but no deputies had any injuries requiring medical care, according to the sheriff’s office.

The suspect is being held on suspicion of first- and third-degree assault, eluding police, possessing a stolen vehicle, resisting arrest, driving under the influence of intoxicants and third-degree driving with a suspended license.

Ludwig Wittgenstein : The possibility of “crossing” was encoded into the objects “chicken” and “road”, and circumstances came into being which caused the actualization of this potential occurrence.

Mohammad Fawad Mohammadi (right) with his An Afghan immigrant who worked as an interpreter for the US military nearly lost his right leg when a driver intentionally rammed him in a parking lot in Oregon earlier this month, police and coworkers said.

Mohammed Fawad Mohammadi, 27, told the Portland Tribune that he was visiting Oregon’s coastline with his wife and infant son on March 6 when got involved in a minor car accident in a Walgreens parking lot in Lincoln City.

After Mohammadi and his wife got out of their car, police said the other driver, identified as Perry Nicolopoulous, 68, put his car in reverse and backed up toward the couple for a second time while their young son was still inside their vehicle. Mohammadi said he pushed his wife away but was pinned between the two vehicles.

Police said Nicolopoulous then drove toward Mohammadi again, striking his car a third time as he managed to roll away.

“I called to my wife to grab the baby and run,” he told the Portland Tribune. “She acted quickly, but our car was rammed three times with the baby inside. I’m so lucky they’re both OK.”

Mohammadi was flown by helicopter to a trauma center in Portland, where he underwent surgery to repair his leg, which was severely crushed, according to a GoFundMe campaign created by a coworker to help offset his lofty medical expenses.

“Currently it appears that he is suffering from the crushed leg, broken hips, fractured spine and numerous facial injuries,” according to the website, which garnered more than $33,000 in donations as of Wednesday. “At this writing he is undergoing a second surgery to save the leg. The doctors have prepared him for the high likelihood that the surgery will not be successful.”

Peter Sollom, director of the Palisades Market grocery store in Lake Oswego, where Mohammadi works, said Mohammadi immigrated to the United States nearly three years ago from his native Afghanistan, where he worked as an interpreter for the US military for four years. He was also known to customers and colleagues as the “soup king” due to his affinity for tinkering with some of the recipes at the grocery store.

Stephanie Ballard Agramonte, who started the GoFundMe page, said many staffers at the location were angry when they learned of the hit-and-run accident.

“The evening we got the details on what happened, so many people had the same reaction: ‘People are horrible. Can you believe what people will do?’” Agramonte told the Portland Tribune.

Investigators believe the crash was an “intentional act,” Jason Palmer, a spokesperson for the Lincoln City Police Department, told The Oregonian on Tuesday.

Nicolopoulos was arrested and charged with driving under the influence of intoxicants. He was later additionally charged with attempted murder and assault. He remains in custody at the Lincoln County Jail in lieu of $1 million bail. He’s scheduled to appear for a preliminary hearing on Thursday, The Oregonian reports.

Palmer said there’s no indication thus far that the deliberate attack constituted a hate crime, although investigators had not yet determined a motive.

“It appears that the victim was random,” Palmer said. “We find no connection between these two individuals.”

Mohammadi, meanwhile, expects to be hospitalized for another month, and full recovery might come within six months, he said. For now, he’s enjoying well-wishes from strangers and the love of his wife and young son.

“I feel so great when I saw all of my friends coming in, people coming to say hi and to relax with me,” he told the Portland Tribune. “Even people I don’t know, seeing them say nice things about me on Facebook. They wrote things wishing me health. I can’t tell you how much that means to me.”

‘Well, yes, I suppose you could appeal. However, if you lost, you’d be responsible for all court costs.’

A Godfrey woman was charged with a wrong-way crash on I-255 that killed a 30-year-old Roxana man.

Amanda Runtz, 22, allegedly was under the influence of benzodiazepines while she was driving just after 10 p.m. Jan. 17 on I-255 near Godfrey, according to a press release from the Madison County State’s Attorney’s Office.

Burford was pronounced dead at the scene, and Varble was taken to the hospital. Runtz was airlifted to a St. Louis hospital with critical injuries. Illinois State Police Trooper Calvin Dye Jr. said Burford had not been wearing his seat belt at the time of the crash.

Julius Caesar : To come, to see, to conquer.

A panel of experts from the cannabis, public safety and transportation industries gathered at Colorado State University-Pueblo Thursday to discuss misconceptions and discuss the dangers of cannabis-impaired driving.

The discussion was the first public happening of the Colorado Department of Transportation’s new public safety campaign called The Cannabis Conversation, which is seeking the input of Coloradans to identify solutions to a problem that contributed to 77 fatal car wrecks in 2016 alone.

According to CDOT Communications Manager Sam Cole, the department previously orchestrated ad campaigns to get the word out about cannabis-impaired driving, which he said were successful in notifying the public of the dangers and legal repercussions of driving under the influence of marijuana but seemingly did little to curb citizens’ behavior.

So instead of another ad campaign to speak to cannabis users, CDOT decided to host The Cannabis Conversation in order to facilitate a conversation in which Coloradans could weigh in.

Some of the primary topics discussed at the meeting included how marijuana consumption effects drivers, current law enforcement methods for detecting drugged driving, and ongoing research into tools that measure impairment.

All of the panelists agreed that marijuana consumption can cause impairment that makes it dangerous to operate a motor vehicle, but noted that because marijuana has not been researched as extensively as other impairment-causing drugs, such as alcohol, it is unclear to what extent.

The lack of research is attributable to the relatively new status of legalized recreational marijuana in Colorado, and panelist Kristi Kelly, the executive director of the Marijuana Industry Group, said a number of research studies on marijuana impairment are being conducted in the Centennial State.

Cole expressed that though research has not yet identified the extent to which marijuana causes driving impairment, studies have shown that being under the influence of marijuana does impact perceptions of distance, speed and time.

“We would all agree that at a certain level, yes, marijuana does impair your ability to drive,” Cole said.

“I think where everything gets squishy is in the research addressing at what level. Does somebody have to smoke a whole joint? Eat a whole edible? Or would they be fine just having a hit or two off a joint and they can still drive?

“Science just really hasn’t met us there, so we’re still having this discussion, both in the scientific and research community. Meanwhile, CDOT is really digging deep into this data to understand a lot more about these crashes that involved somebody who was high.”

A variety of factors play into how impaired each individual driver may be after consuming marijuana, including the amount consumed, time elapsed since consumption and the individual’s tolerance.

Because marijuana can be detected in a person’s blood long after they’ve consumed it, panelist Jack Reed, a statistical analyst for the Colorado Department of Public Safety, detailed that the state enforces existing driving laws by first identifying impairment through behavioral cues and later testing for a specific type of THC called Delta-9.

Colorado law dictates a person cannot legally drive if any more than 5 nanograms of Delta-9 THC is detected in his or her blood and Reed said Delta-9 is different from other types of THC in that it is usually only detectable in significant quantities when marijuana has been consumed within a short time of being tested, typically around two hours.

While research surrounding marijuana impairment and its effect on a citizen’s ability to drive continues to progress, panelist Matt Herrera, manager at the Pueblo Starbuds Dispensary, said he advises his customers to simply treat marijuana consumption the same way they do other impairment-causing drugs.

“There’s a misconception when it comes to alcohol and marijuana that a lot of people think marijuana is way less of a problem and it’s not,” he said.

“Even if the number is one marijuana-impaired driving fatality, that is one too many,” Kelly said.

“So compared to alcohol for example, the numbers are significantly lower than alcohol. But in our opinion, one is still too many. So our goal, and why we work with CDOT … is because we are fully committed to educating folks on the road so that they can make the right choices beforehand.”