Cochran was eligible for the program, which he must complete to avoid facing trial, because it was the first time he was cited for DWI when police pulled him over in the early morning hours of Sept. 2.

Enrolling in the diversion program requires participants to accept responsibility for the offenses they are accused of, though it does not constitute a guilty plea.

Cochran’s attorney, Wiley Beevers, maintains his client was not impaired on the night he was pulled over. But the law prohibits drivers from having any trace of a controlled dangerous substance — such as a painkiller — in their system, Beevers said.

Cochran, 55, tested positive for a combination of prescription painkillers but had no detectable alcohol in his system after he was pulled over.

“We were very happy the district attorney afforded us this opportunity,” Beevers said about the diversion program. “And we are availing ourselves of it.”

Cochran was pulled over after police received a call about his Chevy Tahoe weaving over the roadway and even going onto the neutral ground on Joe Yenni Boulevard in north Kenner.

An officer pulled the car over, and Cochran performed poorly on a field sobriety test while displaying bloodshot eyes and slow speech, police said.

Police said Cochran made unusual remarks to officers, telling them, “I guess this means I should fill out my resignation papers,” and also bit off the mouthpiece of an alcohol testing device.

They suspected he was impaired by drugs and jailed him on counts of driving under the influence as well as reckless driving. A blood test showed the presence of oxycodone, hydrocodone and oxymorphone.

Beevers said Cochran had been prescribed the first two drugs, commonly sold as Oxycontin and Vicodin, because of surgeries. Oxymorphone is a byproduct of oxycodone and not a separate drug, he said.

Beevers said his client had not taken the medications for several days before he was pulled over and denied he was driving recklessly. “He was not impaired,” he said.

Participants in the Jefferson diversion program are required to blow into a device preventing anyone intoxicated from starting a car. They also must undergo counseling, take drug and alcohol tests, and meet with a Mothers Against Drunk Driving panel.

B.F. Skinner : Because the external influences which had pervaded its sensorium from birth had caused it to develop in such a fashion that it would tend to cross roads, even while believing these actions to be of its own free will.

More than half of marijuana users surveyed said they “consistently” drove while high in the last 30 days. 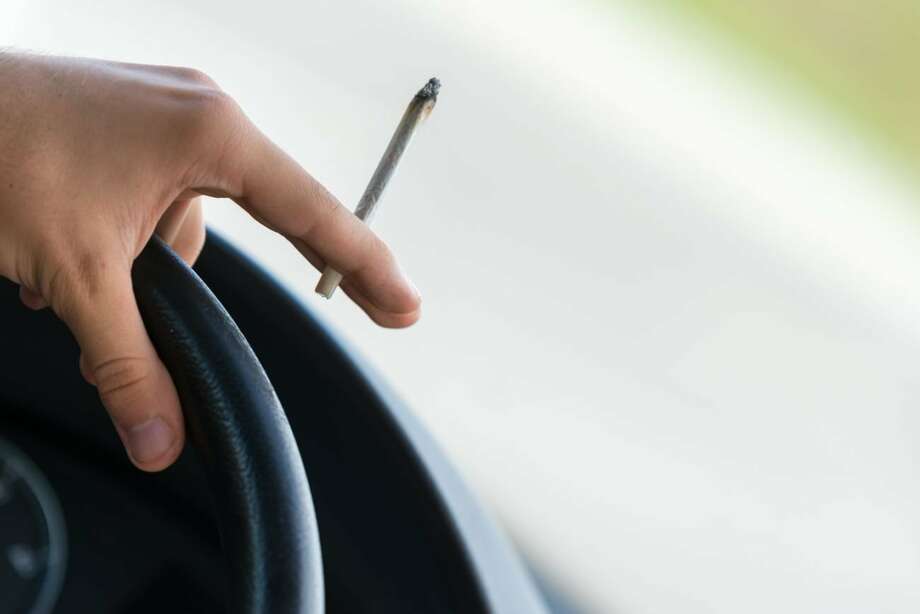 Driving while high has not risen to the level of havoc caused by drunken driving but it has become enough of a problem that government officials in Colorado and the state’s marijuana industry have teamed up to address it.

In 2016 alone, the state had 77 fatal wrecks that involved drivers with THC in their bloodstream, according to the Colorado Department of Transportation. THC is the chemical ingredient in cannabis that is psychoactive – in other words, it’s what causes the high feeling.

Officials in the Rocky Mountain State have partnered with the marijuana industry to launch a new project that offers state residents the chance to participate in a “Cannabis Conversation” by taking an online survey.

The survey is designed to gather the opinions of state residents regarding the drugged driving issue and collect information on their habits and behavior regarding marijuana use and driving.

That information will, in turn, guide public officials and the marijuana industry on practical ways to reduce drugged driving. It’s a multi-year effort. It’s also needed because both law enforcement officials and businesses involved with legal marijuana recognize past efforts have not worked.

Driving under the influence of cannabis is a complicated, and even controversial, topic for many reasons. State police, academic researchers and private companies are still looking for ways to accurately determine whether a driver is impaired. There is continued debate over what even constitutes driving while impaired by cannabis.

The issue also has been politicized. Fatality figures such as the one from 2016 in Colorado are used by marijuana opponents to argue against legalization.

Industry advocates point out such numbers have not been treated as a litmus test for legalization of products. Our own federal government reports that more than 16 million Americans live with diseases caused by cigarette smoking. Also, excessive use of alcohol led to about 88,000 deaths every year between 2006 and 2010.

That offers perspective, but no one argues drugged driving is an issue that can be ignored.

Both Colorado officials and marijuana industry leaders have led public education efforts in the past to educate against drugged driving. The state Department of Transportation reports that those efforts have reached 90 percent of those who use marijuana in the state. They now understand they can get a DUI for drugged driving. However, more than 50 percent of marijuana users “consistently” report they drove while high in the last 30 days.

What gives? State officials suspect that people have a different view of drugged driving than they do drunk driving. They hope the “Colorado Conversation” will provide insight into people’s attitudes on the issue, as well as more information on how often they do it and under what circumstances.

Sam Cole, safety communications manager at Colorado Department of Transportation, told the CBS affiliate in Denver that the initiative is about “hearing from many different voices on the topic of driving high and understanding how we can more effectively connect with people about the dangers of doing so.”

Cole also noted that while drunk driving has been a topic in the national conversation for decades ”we aren’t having the same conversations about driving high.”

Kristi Kelly, executive director of Colorado’s Marijuana Industry Group, said cannabis businesses are partnering with the state on the program because “responsible consumption and reducing marijuana-impaired driving is a shared priority.”

Canadian ski cross competitor Dave Duncan was arrested for allegedly stealing a vehicle after a nigh out drinking with his wife and a manager.  (AP)
Canadian ski cross competitor David Duncan, his wife and a coach apologized Saturday after they were arrested for allegedly stealing a car while intoxicated at the Pyeongchang Winter Olympics, police said.
Duncan, 35, his wife Maja, 32, and Ski Cross High Performance Director Willy Raine, 48, were accused of taking a car outside a bar just after midnight Saturday and driving it near the Pyeongchang athletes village, CBC reported.
South Korean police stopped the vehicle, reportedly an AHMO Hummer, and found the three intoxicated people.
Raine was allegedly driving the vehicle with a blood-alcohol level of 0.16, according to CBC. The legal blood-alcohol limit in South Korea is 0.05.
The three were taken into custody in Gongneung and banned from leaving South Korea. They were released late Saturday, CBC reported. It’s unclear if they had to pay a fine or face other consequences.
Canadian Olympic Committee chief executive Chris Overholt confirmed in an earlier statement that an “incident occurred” just after midnight.
http://www.foxnews.com/sports/2018/02/24/canadian-skier-arrested-at-pyeongchang-olympics-for-stealing-car-while-intoxicated-police-say.amp.html

Aristotle : To actualize its potential.

Darien police say the 53-year-old Wilkos turned himself in Wednesday after learning there was a warrant for his arrest.

Police say Wilkos, a TV talk show host who was the security director on “The Jerry Springer Show,” had a blood alcohol content of 0.29 after the crash Jan. 21. That’s more than three times the legal limit to drive. No other vehicles were involved, and Wilkos was alone. He was treated at the hospital.

He was freed on $1,500 bond and is scheduled to appear in court March 5 to face charges including operating under the influence.

Wilkos in a statement said he “had a complete lapse in judgment which resulted in me drinking and getting behind the wheel of my car.”

A semitruck driver pleaded not guilty Friday to causing a six-vehicle collision in Lakewood that put a woman in a coma Thursday and snarled traffic at state Route 512 and Interstate 5 for hours.

Jose Trinidad, 41, was ordered held in lieu of $250,000 bail after pleading not guilty to vehicular assault and reckless endangerment.

Washington State Patrol troopers believe Trinidad was under the influence of drugs, possibly methamphetamine, when his truck slammed into the back of a Prius stopped at a red light.

The force pushed the car into other vehicles and across the intersection.

The Prius driver suffered a head injury, broke three limbs and was put into a medically induced coma. Another man from the collision was taken to the hospital with unknown injuries.

Trinidad was driving west on state Route 512 in a semitruck without a trailer when it hit the rear of the Prius about 1:45 p.m.

The Prius was pushed into a Pontiac Grand AM stopped in front of it, forcing the Pontiac over a guardrail on the side of the freeway. The car came to rest with its rear atop the guardrail.

The semi continued shoving the Prius across traffic, through the intersection and into the side of a Ford pickup turning left onto eastbound state Route 512.

The pickup then hit a Honda Civic.

Firefighters had to extract a woman from the Prius.

When troopers arrived, Trinidad told them he’d fallen asleep behind the wheel and denied being on medication. He was “shaking and spasming uncontrollably,” according to records.

Troopers believed he was under the influence of intoxicants.

When they asked about small dots on his forearm near a vein, Trinidad said they were spider bites and denied he’d used drugs. He admitted to sometimes using meth.

Trinidad was arrested in Colorado in August for possessing meth, court records show.

Investigators believe he left the Portland area about 4 a.m. Thursday to make deliveries in South Seattle. He was driving west on state Route 512 on his way to I-5 to head back south, when the wreck happened.

Jones said in court that Trinidad had limited criminal history, but noted that he appeared to be on probation for having methamphetamine in Fort Collins, Colorado in August.

After Thursday’s wreck, he was taken to Allenmore Hospital for a drug test. Toxicology results were not immediately available.

The investigation closed the area for more than four hours.